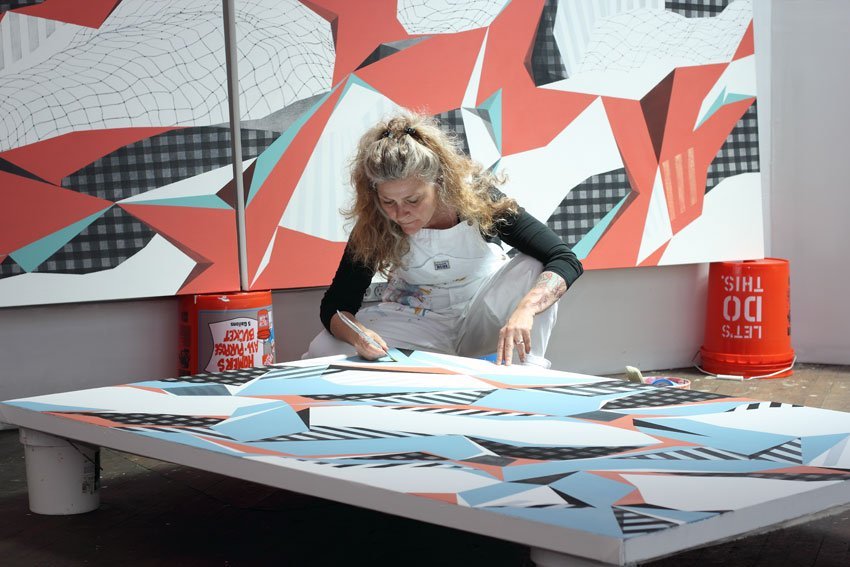 Jane Barthès inhabits an original world that has largely strayed from the usual career paths and institutions expected of an artist in favor of her artistic freedom. Her creative journey has been intensely personal, involving considerable travel about the globe. Each port of call has been an opportunity to explore and integrate the unique arts and cultures. It began with a comic strip in London in the 1980s. To this day, she considers herself primarily a draftswoman, forever looking to exploit the illusion of space in new ways. Her evolution has taken her from the comic strip, through portraiture, figurative narrative painting and finally abstraction. She has spent her time deconstructing and reconstructing all she knows about drawing and painting to better understand and construct the notion of the abstract in new ways.

The layers in her art have amassed over time. Notably, they involve a layman’s fascination with Quantum physics as well as a lifelong study of Zen philosophy. She is intrigued by the idea that beauty can result from chaos’; opposing concepts such as poetry and math are utterly interconnected. Her use of color is both bold and yet restrained. Her use of negative space is also required to do much of the work. Grounded in an intuitive approach she has developed over the years she seeks to share a distilled space for contemplation. This should never be confused with Minimalism, although she says she “flirts” with the movement but not in a way that a rigid movement favors the cool over the dramatic. It is a passionate product of her search for what is essential.

Barthès’ early work bathed in a love of European Expressionism, but she was always drawn to Geometric art. She says it took years to reconcile the two. As a result, her geometric forms are infused with a more expressive, Mediterranean energy that contributes in a fresh way to the American Geometric/MADI conversation. Underlying everything is her obsession with the intangible energy of the life force.

Barthès was born in Nigeria to a fiery Catalan, French father and a reserved English mother; this inherited duality has strongly impacted her work. She says, “I have turned my world upside down many times”. Those conscious acts of self-implosion may have at one time seemed random but have become reflective of her artistic point of view.

Barthès has trekked across the African continent as well as much of Asia and the developing world before attending Wimbledon School of Art at the University of London. Following graduation, she left the UK to spend a decade living and working in the South of France where she established herself as an abstract artist in London and France while also teaching life drawing and designing sets for theatre.

In 2005, curiosity and a desire for change lead her to travel to New Mexico, US, where the extremes of the desert inspired her work for 5 years. Barthès then returned to urban life, to Chicago in 2009, a place she calls home and where she is currently working in her studio full-time.

EDUCATION
BA with Honors in Painting from the London Wimbledon Art School, UK 1994